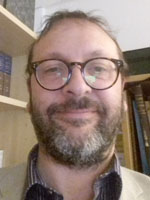 Dr David Milsom (BMus Hons, MMus, PhD, FHEA) is a Senior Lecturer at the University of Huddersfield, having joined the staff in 2010. His teaching is principally in the area of performance, although he also teaches musicology. David is an internationally-recognised scholar of string playing in general and nineteenth-century violin performing practice in particular; he is also an active professional violinist and violist in a range areas spanning ‘baroque’ performance on period instruments to modern solo, chamber and orchestral playing. At Huddersfield he was Head of Performance (2014-2019), and is director of the Nineteenth-Century Performance Research Group (NPRG) in research centre, ReCePP. He will be taking up a new role as 'Director of Classical Ensembles' on return from sabbatical in October, 2019, seeking to reshape classical performance provision at a department with a long and proud performance history.

David read music at the University of Sheffield, gaining a first-class degree in 1995, an MMus in 1996 and PhD in 2001. In 2003 David was awarded an Edison Fellowship by the British Library, in which he continued his studies into the performance styles of early recordings, and in 2006 he was awarded a Fellowship in the Creative and Performing Arts by the AHRC in a project entitled ‘String Chamber Music of the Classical German School 1840-1900 – Studies in Reconstructive Performance’. His research since joining the staff at Huddersfield remains in the sphere of nineteenth-century performing practices, in which manner he performs chamber music regularly with his nineteenth-century chamber group, The Meiningen Ensemble. Current projects include a new monograph for Boydell and Brewer, setting up and releasing recordings on Huddersfield-based new recording label, Pennine Records, along with other puiblication projects.

Outside his immediate specialism, David has undertaken music journalism (as a reviewer for The Strad magazine between 2008 and 2017), and was the author of Naxos' A-Z of Solo String Players (2014) - a biographical dictionary of over three hundred string players with biographies, recordings listings, and reviews. His performing activities since coming to Huddersfield have included conducting the university orchestra, string orchestra, and choir in a number of successful performances, and helping to found baroque chamber group, Four's Company, where he plays baroque violin. David is also an experienced choral tenor performing regularly with semi-professional Sheffield Chamber Choir (of which he is Chairman), and, since 2013, has made a yearly pelerinage to rural France to perform as part of 8-voice choir, Voces Sacrae, under the directorship of noted choral director, Judy Martin. David's eclecticism can be gauged by his participation, from time to time, in 'non classical' contexts including, notably, a collaboration with Wayne Hussey (The Mission) to record incidental music to the Brazilian play, 'As Ismas Siamesas', shortlisted for several Brazillian recording awards in 2018 (EWS RO22). David has also been a violin and viola teacher for over 25 years, and continues to maintain a small private practice in his spare time. In 2019, David (as leader) became a founder member of 'The Brigantes' orchestra, a new professional orchestra based in Sheffield (conducted by Quentin Clare); press attention praised David's solos as 'beautiful and lyrical.'

Masterclasses for Music in the Round

Activity: Other activity types › Other

Times and Traditions: String Recordings c.1900 – 1940 as a Window Upon Divergent Practices

Toward the Unknown Region: Back to Basics in Romantic Performing Practices