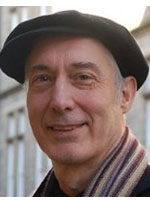 From 1986-89 I was a self-employed Performance Specialist enaged in a wide variety of projects including devised physical performance, clowning, storytelling, devising staff training programmes for companies such as The Body Shop, and running workshops in prisons, adult education centres, a drug and alcohol resources centre, and a centre for excluded pupils.

Prior to studying for a first degree in Drama (with Philosophy) at UEA in 1983, I created solo performances and worked with little known fringe theatre companies such as The Raging Id. I also worked as an ASM and theatre technician at a multi-function arts centre.

I have a number of research strands and projects which congregate around a network of issues and processes of creativity, devising, improvisation, pedagogy and health. I am partly concerned with the impediments to these processes and ways of overcoming them although that is often an implicit rather than explicit condern in my publications. These questions inform my practice-as-research work as well and also my pedagogy.

Plotting a Path for Later Steps: Tuning in with Núñez, Rancière, and Sologub

Book review: Grotowski's Bridge Made of Memory: Embodied Memory, Witnessing and Transmission in the Grotowski Work by Dominika Laster

Journal of Performance and Mindfulness (Journal)