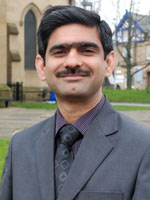 Dr Merchant joined the University of Huddersfield in October 2013 and is currently working as a Subject Lead in Pharmacy and Course Leader for the Postgraduate Pharmacy Suite. He has a formulation sciences background with extensive experience both from industry and academia. He has a particular interest in drug delivery research at the interface of gastroenterology and publishes regularly in peer-reviewed journals. He is an overseas qualified and registered pharmacist. His clinical knowledge and expertise in pharmaceutics helps students to understand the clinical and therapeutic principles underpinning the science of dosage form design.

Before joining Huddersfield in November 2013, he was a postdoctoral fellow at the University College London (UCL), where he investigated various technologies for drug delivery into gastrointestinal tract and offered technical support and expert advice to collaborators and clients from academia and industry on various formulation and drug delivery aspects. One of his postdoc assignments at UCL was to develop a novel formulation for colonic delivery of statins for an emerging pharmaceutical company in UK. During his time at UCL (Nov 2007 to Nov 2012), he has also developed novel in-vitro solutions for assessment of pharmaceutical and neutraceutial products in physiologically relevant conditions. He developed innovative strategies for exploiting physiological bicarbonate buffers for dissolution testing and devised an Auto pH SystemTM – a robust instrumentation and dynamic dissolution media (PCT/GB2013/051145) employing physiological bicarbonate buffers simulating the aboral changes in gastrointestinal pH while dosage form transits down the gut. Hamid has also won a proof of concept award from UCL Business to further the technology.

Hamid was associated with Abbott Laboratories Ltd from December 2002 to November 2007 and served in various capacities such as quality, formulation, new product development, continuous improvement and project management.

Dr Merchant has a Pharmacy degree (BPharm) with a Masters in Pharmaceutics (MPharm) from University of Karachi and a PhD in Pharmaceutical Formulations from the University College London (UCL). He also have a PGD in Quality Management from NED and a PGCert in Higher Education from Huddersfield.

Dr Merchant has a particular interest in drug delivery research at the interface of gastroenterology and publishes in various aspects of oral delivery. For collaboration and technical support in following areas, please feel free to contact him.

The advancements in materials sciences and improved understanding of the human gastrointestinal (GI) environment are leading to intelligent design of formulations. The rationale design and selection of delivery technologies improves the performance of orally administered drugs, for example, by improving drug solubility, flux or by delivering it to the specific gastrointestinal regions. Our research in formulation sciences offers novel and customised solutions for immediate and delayed release formulations; and drug targeting in GI tract, such as delivery to the colon. .

Dissolution and permeation of drugs

Drug dissolution in gastrointestinal fluid and its permeation through the gastrointestinal mucosa is a key consideration for its absorption. Our research continues to explore and develop various in-vitro technologies to provide a reasonable estimation of absorption and help selecting a lead formulation for clinical evaluation. .

One of our innovative strategies is the exploitation of physiological bicarbonate buffers for dissolution testing. This led to the development of an Auto pH System™ – a robust instrumentation and dynamic dissolution media employing physiological bicarbonate buffers simulating the aboral changes in gastrointestinal pH while dosage form transits down the gut after emptying from stomach (PCT/GB2013/051145). The system exploits the physiological equilibrium of bicarbonate/carbonic acids to control and manipulate the pH and offers a robust automatic pH control without using conventional non-physiological acid/base titration techniques. .

The novel system has numerous applications in drug delivery and has been employed to assess dissolution and drug release from various delivery systems, such as: .

Pre-clinical testing is paramount for the improved understanding of the behaviour of orally administered drugs. Various animal models are used with the aim to mimic as closely as possible the conditions of the human gastrointestinal tract. The characteristics of the gastrointestinal milieu have a significant influence on orally administered drugs. Therefore, rational selection of animal models for a specific delivery technology is a key to successful translation of preclinical observations to clinic. We have investigated the gastrointestinal milieu of various animal models, such as mice, rat, guinea pig, rabbit and pig, and their effects on drug solubility and absorption. We have also explored the effects of ageing in gastrointestinal environment of rat in relation to drug delivery.

For a complete list of peer-reviewed publications, please refer the Publications section.

Physiology of the Gastrointestinal System

Open Access
Diet
Life Style
Body Mass Index
Incidental Findings
Liver
Your message has successfully been sent.
Your message was not sent due to an error.
If you made any changes in Pure these will be visible here soon.