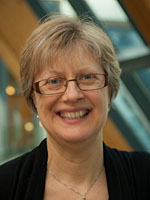 Jill has been Professor of Production Economics at the University of Huddersfield since January 2015. She started her career at British Aerospace, Warton Division as a Senior Commercial Apprentice, before moving to academia in 1988 becoming a lecturer, senior lecturer and finally Reader in Production Economics at Lancaster University. She has therefore been involved in teaching, reasearch and leadership roles in higher education for more than 30 years.

Jill has an established and excellent record in teaching, and this is recognised in the award of a Pilkington Teaching Award from Lancaster University in 1991, and a National Teaching Fellowship (NTFS) in 2011, and she is also a Fellow of the Higher Education Academy.

Jill’s core research examines organisational efficiency using frontier estimation techniques. From a combination of widely-cited journal publications and two highly influential books, Jill has gained a prominent national and international research reputation in education economics. Her early work, including the book Performance Indicators in Higher Education (1990), influenced the manner in which league tables are constructed, from an output approach to the now standard value-added approach. As a consequence, Jill has worked on efficiency issues with, for example, the Department for Business Innovation and Skills (D/BIS), the European Union, the Kuwait Institute of Scientific Research and the Swedish National Audit Office. She has also been invited to speak on education efficiency at a number of venues including the Swedish National Audit Office (2010), the Beijing Forum (2012), Beijing Normal University (2013), the Annual International Conference of the Association of Higher Education Researchers, Moscow (2013), Efficiency in Education Workshop, The Work Foundation, London (2014), and the 5th Workshop on Efficiency and Productivity Analysis, Catholic University Porto (2015). In addition she co-organised a conference on Efficiency in Education at the Work Foundation, London (19th to 20th September 2014) and has edited a special issue of the Journal of the Operational Research Society on Efficiency in Education (2016).

Jill has recently started to apply frontier estimation techniques in the context of the banking sector and in particular in comparing the Islamic and conventional banking business models. As testimony to her developing reputation in that context, she has presented papers on this subject at various conferences and was on the scientific committee for the Islamic Banking and Finance conference held at Lancaster University in 2014.

Does merging improve efficiency? A study of English universities

Dynamics of Inefficiency and Merger in English Higher Education From 1996/97 to 2008/9: A Comparison of Pre-merging, Post-merging and Non-merging Universities Using Bayesian Methods

FDI and heterogeneity in bank efficiency: Evidence from emerging markets