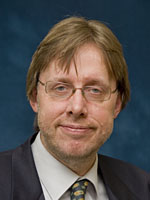 John Anchor is Professor of International Strategy and Associate Dean (International) in the Business School. Previously, he has held posts as Head of Department, Principal Lecturer, Senior Lecturer and Lecturer at the University of Huddersfield.

John is a career academic. His early aspiration was to be a scientist but as a result of taking a Management minor as part of his Bachelor’s degree he switched to the Social Sciences. His PhD in Industrial Economics was concerned with the factors influencing the allocation of resources to research and development (R&D) in the UK chemicals industry. Both his Bachelor’s degree and doctorate were obtained from the University of Manchester, where he also worked as a research assistant.

John has undertaken a large number of international research and education projects. John has received ten awards (medals) in recognition of his role in developing research and education partnerships in Central and Eastern Europe. These include a Gold Medal, awarded by Rector of Technical University of Liberec, Czech Republic, in November 2017, ”in appreciation of his extraordinary contributions to the development of the university, science, culture, education and academic freedom”.

In addition to his academic career, John has had extensive involvement in Public Service. John served as a Municipal Councillor for a number of years, including three years as Chair of a Housing Committee.  He has also been a Governor of Secondary, Special and Primary Schools.

Gift vs Bribe: What Counts as Corruption?

The Earnings Expectations of Business Economics Students in the Czech Republic and England: the effect of seniority

The Internationalisation of English Business Schools: a Dynamic Capabilities Approach

The internationalization of Nigerian firms: Motivations and location patterns

The Earnings Expectations of Business Economics Students in the Czech Republic and England: the Effect of Seniority

Gift vs Bribe: What Counts as Corruption?

The Internationalisation of English Business Schools: A Dynamic Capabilities Approach

Internationalisation: Towards a Measure for UK Universities