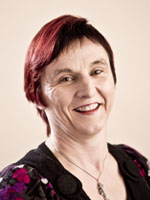 Kate Aspin joined the University in January 2007 and is a Part Time Senior Lecturer on the BA Early Primary Course and the PGCE Primary course where she is Admissions Tutor and Mathematics Tutor and contributes to other modules on the courses. Kate spent 13 years in Primary Teaching, working for three different Local Authorities in a range of schools and age groups. She has taught from Year 1 to Year 6 and has co-ordinated subjects as varied as PE, ICT, PSHCE and Literacy.

In 2000 she was appointed as a 'Leading Mathematics Teacher' for Trafford LA, which involved supporting other teachers and support assistants and conducting demonstration lessons for visiting staff to develop and extend skills. Kate was also Key Stage Two co-ordinator, student teacher co-ordinator and part of the senior management of the school and was involved in Key Stage Two/Three transition work to improve the transition between schools in the locality.

In 2002 Kate was appointed as a Deputy Head Teacher and was subsequently Acting Head Teacher three times in three years. During this time she was asked to support several NQTs and to support a failing NQT by Calderdale MBC, a role which she enjoyed and had led her towards a role in ITT. She was also head of Key Stage One and Foundation Stage at this time.

Work-based practice: your next steps

post-graduate studies
Teaching
qualification
website
career
Your message has successfully been sent.
Your message was not sent due to an error.
If you made any changes in Pure these will be visible here soon.