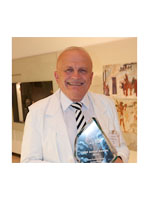 Len Gelman, PhD, Dr. of Sciences (Habilitation) joined the University of Huddersfield as a Professor, Chair in Signal Processing and Condition Monitoring and the Director of Centre for Efficiency and Performance Engineering, in 2017 from Cranfield University, where he had worked as a Professor and Chair in Vibro-Acoustical Monitoring since 2005, creating a team focused on vibro-acoustical condition monitoring of complex systems with an emphasis on their practical deployment.

Len has published more than 250 publications, including 17 patents and 2 book chapters and he is a co-editor of 11 books published by Springer. He is a Fellow of British Institute of NDT, a Fellow of the International Association of Engineers and a Fellow of UK Institution of Diagnostic Engineers.

Len made 42 plenary keynote presentations at major international conferences during period 1999-2019 and also made more than 100 invited lectures and seminars in the UK, USA, France, Italy, Denmark, Switzerland, Holland, India and Israel during period 1996-2019.

He was a Visiting Professor at nine Universities abroad and at Argonne National Laboratory (USA).

Bearings (structural)
Condition monitoring
Induction motors
Engines
Signal analysis
Your message has successfully been sent.
Your message was not sent due to an error.
If you made any changes in Pure these will be visible here soon.