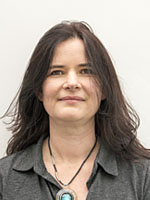 Liz trained in the art of Costume Construction at the prestigious Theatre Wardrobe Course at Liverpool’s City College (formally Mabel Fletchers). She first started working for the Costume with Textiles course in 2006. Prior to this she was the Costume supervisor at Bretton Hall College (1995-1998) and ran Costume construction projects for The University of Leeds(1998-2003)

She has covered all aspects of costume work: pattern cutting, making and fitting costumes and accessories, wigs dressing and fitting, dye-ing and breaking down, Millinery, leather and fiberglass work, mask making along with organisation and maintenance of costume during production for theatre, touring, film and television.

A reflection on the benefits of revitalising the teaching content and style of the renowned Mabel Fletcher costume course to re-skill the costume making profession: an early stage research project

Second skin: Investigating the production of contoured patterns for the theatrical costume industry

clothing
Theaters
industry
Museums
theater
Your message has successfully been sent.
Your message was not sent due to an error.
If you made any changes in Pure these will be visible here soon.