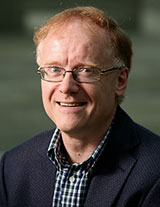 Professor Michael Clarke is Dean of the Graduate School. He read Music at Durham University where he remained for his PhD. He also holds a teaching qualification (MTC) from the Institute of Education, London University. He has worked at Huddersfield since 1987 and prior to taking up his current role had been Director of Research for the School of Music, Humanities and Media since 2006.

Michael’s research includes composition, software development for music and music analysis. Both his compositions and software have won national and international prizes, including winning European Academic Software Awards on a record three occasions. He has recently been Principal Investigator on the AHRC-funded project ‘Technology and Creativity in Electroacoustic Music’ (TaCEM) working together with Prof Peter Manning (Durham) and Dr Frédéric Dufeu (Huddersfield). This project (2012-5) builds on Michael’s earlier innovative work using software to develop an interactive aural approach to music analysis. In 2011 he was awarded a National Teaching Fellowship.

Michael was an assessor on Panel 35 in REF 2014 having previously been a specialist advisor for the 2008 RAE. He is a member of the AHRC Peer Review College and a Strategic Reviewer for the AHRC. He has also acted as a reviewer for the EPSRC and for funding councils in Austria, Finland and Germany.

Interactive Tools for the Study of Electroacoustic Music Composition Methods: Resources for teaching and learning from the TaCEM software

Using software emulation to explore the creative and technical processes in computer music: John Chowning's Stria, a case study from the TaCEM project

From Interactive Aural Analysis to IRiMaS:Towards A Digital Toolbox for Music Analysis

Performing Works with Instruments and Real-Time Electronics: An Analytical and Interactive Perspective from the TaCEM Projects

Technology and Creativity in Music for Real-Time Electronics: An Interactive Approach to Philippe Manoury and Cort Lippe’s Works

The TaCEM Project: Technology and Creativity in Electroacoustic Music

Interactive Tools for the Study of Electroacoustic Music Composition Methods: Resources for Teaching and Learning from the TaCEM Software