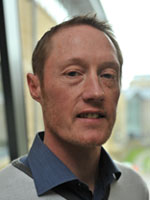 I joined the University in February 2014 having previously studied here myself. I completed the CIPD professional development course and gained a Masters Degree in Human Resource Development prior to taking up a post as lecturer.

Between Dec 2007 and Feb 2014 I worked for Provident Financial Group. In the first 2 years I was the training lead on a major new project then I transferred to a Divisional role (covering Yorkshire, Humberside, the North East and parts of Nottinghamshire) as a People Development Adviser with a specific remit for Learning and Development. Between Nov 2012 and Feb 2014 i was based in Head Office where i worked on the CMI accredited leadership and management programme designing and delivering modules and taking on Internal Verification duties. My major achievement prior to leaving was to design and subsequently manage the Management Learning Academies which provided a six week induction for new managers with a mixture of classroom and experiential learning.

Between April 2002 and Dec 2007 I worked for Protocol Skills (the UKs largest independent training provider). Having started out as an assessor I became an Internal Verifier (IV) and Area Manager for West Yorkshire and Lead IV for Yorkshire and Humberside. In these combined roles I increased our levels of funding by regularly exceeding the funding body target success rate of 70%. During 2005 and 2006 I was seconded to a change management project group which altered the business model from a paper based to an e-portfolio. My role on the project was training lead and I converted all project material into training materials which I then delivered to the pilot location of Yorkshire and Humberside. This successful pilot enabled the e-portfolio to be adopted on a national basis.

Between March 1997 and April 2002 I worked for Thomas Cook. 1997 – 2001 I worked overseas and progressed from being a rep to Head Rep and Resort Manager. I managed multiple resorts in Menorca and Fuertaventura and was Airport Controller in Cancun. My favourite destination was Mallorca where I worked for 3 seasons. My greatest success as a Resort Manager came in Menorca where I achieved 86% good or excellent customer service scores, from 19,000 guests, against a target of 80%. 2001 – 2002 I was Senior Customer Service Adviser in the Bradford office, leading a team of 9, dealing with post-holiday queries.

Personal development plans: Insights from a case based approach

Developing a multi-dimensional framework to identify positive transfer of training